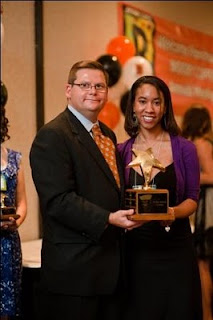 By TOMMY HOWE | The South End

Alana Cole, a WSU alumnus and Biggby Coffee employee, was voted by both customers and staff as “Barista of the Year”.


On rainy, chilly days there is nothing better than the warmth of coffee or latte as it flows down your throat – unless it is served by a barista like Alana Cole who genuinely wants to know how you are doing.

Cole, who graduated from Wayne State with a degree in psychology and is now a Biggby Coffee barista, was given the Todd Miles Award, the Michigan-based coffee-chain’s award for top barista.

Cole, who had developed a fan base at the Biggby Coffee located at 4501 Woodward Ave., said that her “customer service comes natural” simply because she “loves people.”

Cole grew up in Bloomfield Hills and attended Groves High School before graduating from Wayne State with a bachelor’s in psychology. Cole said she volunteered at a summer camp that teaches Detroit children math while subsequently allotting them time to play games and have fun.

She said she dedicated a lot of hard work to learning everything about the coffee business.

It was this sort of dedication that won the attention of a large group of patrons who voted for Cole to be named the best barista.

The award is a local, regional, and national competition between 1,400 baristas in 109 Biggby locations.


Go to Original Article
Posted by BIGGBY BOB at 8:52 AM

What an honor for a barista to win this award - CONGRATS ALANA!

She was very humble and gracious at the awards dinner, very surprised at her win. A very nice moment, and well deserved. Congratulations, Alana!

Congratulations Alana! Keep up the great work at the Wayne State store!

There are a lot of people in organizations with fancy sounding titles and supposedly important jobs. But the most important folks employed by any business are the ones who interact with customers. Congratulations Alana! There is always opportunity in this world for people with your skills.

Alana,
Irma and myself together with the Cayao Group of stores' staff would like to extend our best wishes for a job well done. Congratulations for winning this prestigious award.