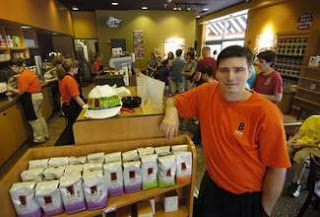 Tim Mickelson really missed Biggby Coffee shop when it closed more than a year ago in downtown Arlington Heights. His craving for the brew prompted him to purchase a franchise.

"Like many others, I was upset it closed. I saw it as a great business opportunity," he said.

Customers lined up outside the shop when it opened Tuesday. Mickelson said he heard great comments about the shop's return.

"One woman said, 'I've waited over a year for this cup of coffee,'" Mickelson said.

He said he wasn't sure of the details around why the shop suddenly closed more than 12 months ago.

The store offers pastry, cookies and scones in addition to tea and hot and cold coffee drinks. A cup of coffee starts at $1.59.

In addition to the coffee, Mickelson added that customer service sets the business apart from competitors.

He added that his wife and 11-year-old son assist in operating the community-focused coffee shop.

Before starting the business, Mickelson, 41, was in commodity trading. He even traded coffee futures, but was never involved in the retail operation of the beverage.

"Business took us out there and family brought us back here," said Mickelson, adding that his wife grew up in Arlington Heights.

When the Michigan-based coffee shop first opened in Arlington Heights and around the country several years ago, the stores were known as Beaner's Gourmet Coffee. The company started changing the name of the company stores in 2007 when it received complaints from customers who found the original franchise name offensive.

The switch, not provoked by lawsuits or complaints, was simply a move to avoid offending anyone, the company has said. The change didn't stunt the growth of the company as Biggby has doubled its store numbers every two years since the company began franchising in 1999.

Mickelson says it's not easy launching a new business in a down economy. However, he says that if you believe in the product, it makes the process a whole lot easier. He added that it's tough seeing other stores close down around you.

"It weighs on you," he said. "If I had not been a customer before, I wouldn't be able to do this."

Yahoo! The Arlington Heights BIGGBY store is back!

Happy BIGGBY is back in IL - it will make my drive back to WI wonderful knowing I can get my BIGGBY in the great village of Arlington Heights!