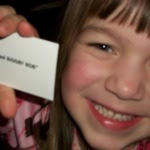 No, he's not the Tooth Fairy.

Catch the real Tooth Fairy whenever that next tooth pops out.

If Biggby Bob is the tooth fairy, I think everyone wants to see those wings! (o:

Biggby Bob as the Tooth Fairy? My head explodes at the mere thought. Talk about a spook story to tell your kids. They won't sleep for a week.