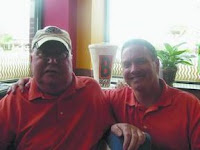 "Mike Waltersdorf wants to thank his father, Leigh, for helping make his dream a reality.

The 42-year-old Ann Arbor resident recently opened the doors to his first Biggby Coffee on Grand River Avenue, in Novi, May 6.

The father and son duo planned to be partners in the business until Leigh, 64, of Okemos, was diagnosed with terminal brain cancer and had to take a step back, handing the majority of the reigns to Mike.

“My dad helped make this happen, and I can’t thank him enough,” Waltersdorf said. “Dad was diagnosed around the time we made the decision to open and it was a decision between him and my mother, Sue, to carry on.”
Full story :)

Cool. What a nice article, and also a clear portrait on the passion with which our franchisees pursue their dream, the way the Waltersdorfs have overcome such huge obstacles. Congrats Mike and Leigh, you deserve the good press! -JD

They are a great bunch and great things will happen for them! They are always in our thoughts.

Great article and great people! Best Wishes to the entire family. I know they will succeed beyond their grandest dreams! clh

Great coffeehouse! I went there with a friend and enjoyed a wonderful cup of Joe.

I totally believe in Mike Waltersdorf and family.

God Bless them all!