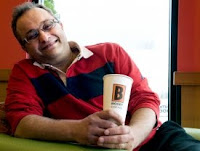 When Mohamed Shetiah moved to East Lansing from his home in Egypt 21 years ago, he didn’t know English, the American culture, or exactly what to expect in the United States.

The only thing Shetiah really knew, he said, was that he was coming to the U.S. for opportunities he couldn’t find at home.

“I came here for a better life, to go to a good school and start a new life and career,” Shetiah said. “Now, here I am.”

On Tuesday, Shetiah opened his 20th Biggby Coffee shop at 4480 Hagadorn Road, in Okemos, giving him more than twice as many stores as any other Biggby franchise owner — which he said was another step in his journey to fulfill his dreams.

Coming to the U.S. in 1989, Shetiah moved in with his uncle, who already had lived in the country for 20 years. Shetiah said his first few years in his new homeland, when he worked various odd jobs at fast food restaurants and golf courses..... Read More....Local finds opportunity with Biggby

Mohamed: You story makes us all proud. It proves that America remains the land of opportunity. Thank you for sharing it.

What a great article. Hurray for another BIGGBY opening this week! Mocha Mocha is my favorite drink!

This is a fantastic story! Mohamed, you provide great motivation to me today. Thank you!

Congratulations on each one of your twenty stores Mohamed!! You have a very powerful story.

Congrats to you Mohamed! I had a great week working at the new store! Your Mt Hope and Hagadorn Team rocks!Thanks for having me! sd