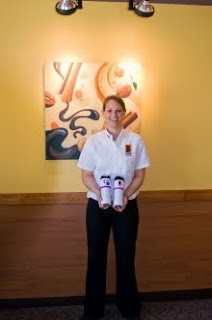 But before long, she was living in Howell, Michigan, and enrolled at Lansing Community College. When she finished her associate’s degree, she continued her education at EMU.

EMU alum Mickeleit recently opened her second Biggby coffee shop in the area in less than a year.“I just liked the area,” Mickeleit said. “It was really similar to the area I was from. A lot of times we think it’s different, but where I’m from is actually very much the same and I felt comfortable.”

Mickeleit was born and raised in Hamburg, Germany, the country’s second-largest city with almost 2 million people. After receiving a bachelor’s degree from EMU in German Studies and a master’s from Michigan State, she is now opening her second Biggby Coffee store at 2550 W. Stadium Blvd.

The first store, which she opened last fall at 1741 Plymouth Rd. in Ann Arbor, has been a success, and her new location opens today.

“I think I am the first Biggby franchisee who opens a second store in less than a year – I think it’s been like seven months for me now,” Mickeleit said. “So [the first] store is still fairly new. I like my first location, but I always knew when I started it that one would not be the end of it for me as part of the Biggby family. So I started looking at different locations even before my first one was finished.”

Mickeleit said she doesn’t have any definite plans for expanding right now, but would like to stay in the Ann Arbor and Ypsilanti areas. She has considered opening a store near EMU.

“The site is always really important,” she said. “I think if I go to Ypsilanti I would love to have a drive through. I think that would be my wish. Right now of course, I have to focus on [the new store] a little bit.”

“The benefit for us was that this used to be a coffee shop before,” she said. “When you walked into it, it actually looked very close to a Biggby. And so it just felt like home already at that point.”

“As a student I was at Biggby quite a bit studying myself,” Mickeleit said. “And I always liked the product, but I also liked the philosophy. And for me, personally, I think it’s a great fit.”

Becoming a teacher was definitely on her mind while earning her first degree in German studies.

Mickeleit was teaching part-time at Okemos High School for a year and working on a master’s in German at Michigan State. After more teaching and schoolwork for other degrees, she decided she wanted to enter into business.

“I used to be a financial advisor before I started with all this schooling, and I really enjoyed that,” Mickeleit said. “I really enjoyed teaching but there was also this business aspect in me that was not quite fulfilled. So teaching doesn’t have much to do with business at all. You’re basically doing what you’re told.

“And that’s when I got involved with Biggby. After I finished my MBA I was looking around at what I could do to be self-employed.”

In addition to running two Biggby coffee shops, Mickeleit is also the sponsorship chair and chair of logistics for Relay for Life of Ann Arbor and involved with the Red Cross. Her Biggby locations are selling coffee mugs to benefit the two organizations.

“We actually have a Biggby Relay for Life team, and as part of the fundraiser we are selling those mugs,” she said. “All the proceeds are going to be donated to the Relay for Life, and the same with Red Cross.

“I think Red Cross is another organization that should be important to all of us,” Mickeleit said. “We never know, it could be rather soon that we’re in need of blood, and so I decided what better way of donating to a cause like that?”

Her stores are also working with the American Cancer Society to promote Michigan’s new smoke-free law. Between May 4 and May 10 people can exchange their last pack of cigarettes for a free tall beverage.

EMU students, with a valid ID, can also go to either of her Biggby stores and receive one free grande-size beverage during the opening week.

This is a cute pic of Jeanine =) Good luck on the second store!

Awesome job Jeanine! I really do like Ann Arbor as much as it pains me to admit, glad to see you like it there.

Can't wait for my next trip to Ann Arbor--it's long overdue, and I have to visit the new store! Congrats Jeannine, and thanks for all that you do!

I'm starting to get to know my way around Ann Arbor, Jeannine ;)

I am sending good technological Juju your way, through Bob's blog.

Good luck, and have fun!

THANK YOU VERY MUCH EVERYONE!! MY TEAMS LOVE ANN ARBOR AND THE NEW STORE IS OFF TO A GREAT START! CAN'T WAIT TO SEE ALL OF YOU IN ONE OF MY STORES.
Jeannine
P.S. JD I think you are the only one from the OPS Team who has not visited me. Don't wait until store #3 is opening ;-)