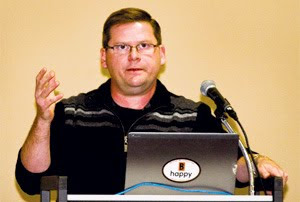 During the session Wake Up and Smell the Coffee, Bob Fish, co-founder and CEO of Biggby Coffee, shared the story of the East Lansing-based company’s success, as well as its use of social media to engage current Biggby customers as well as potential customers and franchise owners.

Known to his fans and admirers as Biggby Bob, Fish said Biggby Coffee started in March 1995 in East Lansing. At the time, there were 35 coffee shops in the greater Lansing area, where Biggby sold its first franchise in 1999. In 2009, there were 111 Biggby units in Michigan, Ohio, Wisconsin, South Carolina and Alabama. “Success is knowing who you are and where you are going,” Fish said. The ability to communicate both internally and externally, as well as focusing on what is important, is also key.

As far as social media goes, Fish said social media is a media like any other – broadcast, outdoor, print and direct mail – and should be treated as such: impressions. He told the audience he gave up his corporate office about two years ago to spend more time in the stores, sometimes incognito. He tells the story of his travels on his blog.He said he uses social media because it is a way to tell your story to your biggest fans, and everyone else. Fish said those using several social media venues need to make sure they link to one another, not in isolation. He said “Different people use different venues and with different frequencies. They learn differently about you at each one and they have different degrees of content.”

Fish said he shares anything that supports the operating philosophy, core values, vision, mission and cultural values of the company and personal information that is relevant to the business. He said social media has two vulnerabilities: it must feel and be earnest, real and truthful; and it is always on.

Seems like a pretty thorough summary of BIGGBY on social media. I particularly like the point about engagement in social media needing to be real and genuine...it's easy to tune out those that are simply using it as ad space.

I love Biggby. I have been purchasing at least one drink a day from Biggby's for years. However, they just raised their prices again! To spend $5.35 a day for a cup of coffee in this economy with food and gas prices at their all time highs. I can no longer justify nor really afford to spend that kind of money on a cup of coffee a day. Biggby should have raised the price of their incidentals such as muffins, scones, and bags of beans etc before raising their drink prices again. I really think Biggby is pricing themselves out of business. People will soon like me stop paying that for coffee if they haven't already. Good luck Biggby I think you're going to need it.

I reported to your corporate office months ago about your Biggby lids cracking then when you go to take a sip the coffee drizzles down the front of your shirt. I was told that you were in the process of getting new lids from Sweetheart Lids. If you got new lids from them THEY ARE STILL CRACKING! I purchased two drinks today both lids cracked. The one drink lid cracked and all I did was set it on the table. The lid cracked before a drink was even taken. This has been going on for months. A couple weeks ago after I left the drive thru I took a drink and the coffee just drizzled down my shirt. I drove back and they did replace it. I guess when people start sending Biggby their dry cleaning bill maybe then you will get Sweetheart Lids to make a stronger plastic or switch to a different company.