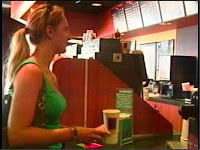 A nice article from the 51st State (Escanaba, MI) Cindy and Pat are awesome operators but don't take my word for it....read this: or click here to go to the article


ESCANABA -- With constantly rising costs and a struggling economy, it's tough to start up a new business.

In April, one Escanaba couple opened up Biggby Coffee in downtown Escanaba and surprisingly says they've had no trouble staying afloat.

What once was a vacant building in downtown Escanaba is now a trendy little coffee shop.

For owner, Cindy Wakefield, business has been better than anticipated.

"Anytime you have a start up, you're not sure exactly how it's going to go, but this community has embraced us and we're thrilled," explained Wakefield.

Wakefield and her husband decided to open up the coffee shop after hearing how much their son enjoyed a Biggby downstate.

"We thought Escanaba would be a great place to have kind of a trendy, fun place that people were familiar with," Wakefield said.

Wakefield says well over 100 customers walk through the doors each day.

Even though they've only been open for four months, she says they have a number of regulars who swing by every morning.

"We have a lady named Laurie, who comes for her Big Chill and we have her recipe placed right on our counter," Wakefield said.

This store is the only Biggby Coffee in the U.P.

Although that may be an advantage, Wakefield says some added costs have come with being so far north.

"We did have an impact from the rising fuel costs because of all the deliveries because we're so far north really impacts us," Wakefield explained. "We have fuel surcharges, but we did have to change our prices, minimal, because we couldn't absorb that cost."

This was the 97th Biggby Coffee to open in the U.S.

Barista Lady Di here...
from above the 45th parallel..

I usually don't publically comment on much. But I must weigh in...
I stopped, introduced myself,
met Cindy and crew.
Great people, beautiful place, nice mural.....
THE BIGGBY WAY...
love it...
keep up the great work
much BIGGBY love to ya

Barista Lady Di
from above the 45th

oops, I meant to type
I even found out their (not there) shoe size, but I'll never tell!!!!