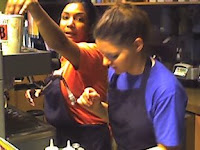 I landed in Pensacola, FL last night (to visit some family)
It was 42 degrees when I left and now I'm walkin' around in short sleeves and it's 72 degrees!

I slept great, but I was excited to get to get up and visit Jeff and Lori today...so I rolled out of bed by 6 am and was on the road by about 6:45.....Mobile is about an hour and a half from where I'm staying.

I didn't have my usual pot of MJ before I left.....but that just made me drive that much quicker....to get my fix. I was just pullin' into Mobile when I got a call from everybody back at the house....asking me to bring (you guessed it) more MJ home, for tommorrow, apparently they had already burned through what we had (wow!)

I was drivin' up Airport Blvd and only a few miles away....when I began to recognize some landmarks from my last visit here....(Jeff reminded me that I drove down the artwork for this store in it's opening week, years ago)....anyway I saw the Hospital on the left and knew to keep my eyes peeled. Bingo, I see it....and hang a left, I see a bright orange shirt out front, I'm guessin' that's Jeff. I still thinkin' I can go in under cover....but, not a chance. I saunter up to the front door....and in his typical laid back fashion Jeff says "How's it goin?" ......that's right, it was that easy....but that's the way it is with Jeff and Lori...it doesn't matter whether you saw them one year ago or yesterday....it always picks up right where you left off....it's kinda nice :) 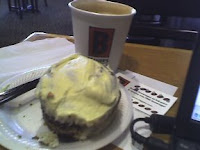 I go inside (I don't think Jeff tipped them off) and Tracy and Danielle give me the howdy-do's right away....'course you get it with the that little bit of Southern charm, that you just don't get up North...it's nice ya'know?

They talk me into a Cinnamon Roll (it wasn't that hard to do :) ) ....I ordered my usual double short latte.....mmm-mmmm, it was good! They had me do the trivia question for an extra stamp on my card....the question was ‘How many stumps on a cricket wicket?” ….it was too easy for me (I lived in England for 3 years)…so I get my stamps (heh, heh.) 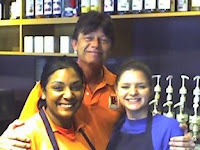 I love watchin these guys work....and Jeff is right in there too....'course Tracy and Danielle are doin' all the heavy liftin' (so to speak)...they were quite the team....takin' orders and kicken them out....while Jeff schmoozed everybody....and I mean everybody, he either knew who they were or he found out....nobody left without feelin' like somebody really cared about the fact that they were there....it's the BIGGBY way, ya'know? 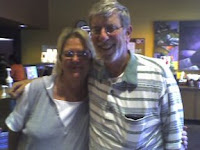 I meet Judy and Ken....they love BIGGBY COFFEE!!!.....Ken starts talking to me right away about why he likes our coffee....he said "it's not burnt, it's rich with lots of body....and you can actually taste the coffee!" I thought for a moment he read our 'playbook' so to speak....but he just recgnized what so many people do....Our coffee is the best.


Well, I'm gonna have to get goin' here in a little bit, but I gotta say this......It has been such a pleasure to be here....and I love what these guys are doing! If you ever get down this way....Mobile, Gulf Shores, Pensacola....you have to stop by....It's BIGGBY COFFEE with a Southern twist :)

I have to be in Escanaba, MI on Tuesday...which is feelin' a little like the North Pole right now (just kiddin' Pat)....but if I don't make it, at least you know where I am :)
Posted by BIGGBY BOB at 9:56 AM

If you ever need a place to hang out, grab some coffee...be, biggby's is the place to do it!!

Am on vacation (5th Anniversary) with my wife Rennee on Anna Maria Island, FL and can't wait until our favorite owners from Portage/Kalamazoo Rick & Kim open their new store in Bradenton/Sarasota area.....it's been 1 week of being completely Biggby free! If it wasn't for the constant view of the gulf and gorgeous sunshine, we may have serious problems :)

Oh my goodness! Here in Lansing we are enjoying the calm before the storm (literally under a tornado watch) enjoying our 70 degree day. What better way to celebrate then having the first Chill of the season from the great 2002 W. Saginaw Lansing location and what does my Barista offer me but a B Happy Kazoo! I played it all the way back to work and every time a tasks is completed I play the kazoo! TGIF!!

Pattick....I know what you mean, it's hard to go without.

Rick and Kim are great!

I'm so glad you got to come to "our neck of the woods".

The Bigby is Mobile is awesome, and the only place I stop for coffee!

Cafe au'Lait - Espresso and Half and Half !