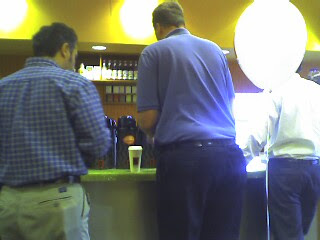 Opening Day here at Farmington Hills....I landed here at 9am sharp....and I don't know where these people are coming from or where they were going before....but they are here now!

Of course the crew this morning Liz, Crystal, Monica, and Jeremy....were handling it just perfectly....but Jose's eyes were moving everywhere checking everything out.....I think he was pleased!

I'm sittin' right by the pick up area....and I can't tell you how many people keep saying that they are excited that BIGGBY COFFEE has landed here...there seemed to be a particular void in this marketplace....I mean there is all kinds of office space here...and nobody seems to have a place they can call their own. That's the thing about BIGGBY COFFEE....people, for whatever reason seem to get it right away...it's theirs, they own it, it's home....and I gotta tell you people are soooo excited!

This location has a drive thru, and I guess there aren't too many of those around here....so that has been buzzin' the whole time too....there are a lot of people that find this the ultimate in convenience....'Course, I still like comin inside the stores myself, but when you are on the run....it just makes sense, ya'know?

I finally got a shot of Jose....and know that I don't typically have the subject of a photo left of center, but it's the best I can do....he never stops movin'....but that's the way it is with our folks, they usually have enough energy to be considered a source of "alternative fuel" all by themselves.

I am invigorated by the conversations going on at the pick up area....it's all about the customers, 'how's your day?', 'do you work close by?', and customers have questions too....course most everybody seems to have been in one of our stores before....I hear people listing off locations that they have been to in other parts of the Metro Detroit area. One person had already been to our other opening today in Northville....pretty cool! ......speaking of which....I gotta goin'....over there to see the Masons.

You can feel the excitement and energy in every picture! Congratulations, Jose and Irma, you're making Farmington Hills a happier place!

Barista Lady Di here...
from above the 45th parallel...
where it is STILL WINTER and WAY TOO COLD.....

Congratulations and good luck
Heres to the opening of you store.
Hope all goes well and just as anticipated.
BIGGBY ROCKS....
We love Nick and Chanin....

Much BIGGBY love
Barista Lady Di
from above the 45th parallel

The balloons, the smiles, the energy. What a great visit I had today in your store!

The Farmington Hills area hit a home run today in adding your store!

Your customers love you already and it is only going to get better everyday!

To the staff at Farmington Hills:
You guys did such a great job today! You not only demonstrated your "chops" that you've built up over the past week in training, but also the sort of energy, excitement, and enthusiasm that we can't teach--all we can do is encourage and enjoy it.

You are a credit to Jose and Irma and I look forward to all you will do for your store, the BIGGBY brand, but most importantly, all of those customers who will love you as much as they do the coffee. All my very best, Jeremy.