Marshmellow -- where were you the last time you had one?

That's right marshmallows are fun....I never met anybody that wasn't havin' fun the last time they had one, ya'know? But that's the way we are :)

So here's a release from Earth Times ...pretty standard stuff but the quote I like from our President is "The result is a new flavor sauce that's fun, delicious and takes us all back to our childhood..." 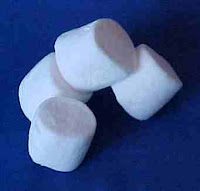 BIGGBY COFFEE has introduced a new marshmallow sauce to complement its popular caramel and
chocolate sauces that make up its signature coffee-based drinks. The
proprietary marshmallow sauce, called B Mellow, is the inspiration and
signature ingredient for six new menu items including the Caramel Mellow
latte, available immediately at all BIGGBY COFFEE locations for an average
retail price of $3.99 per 16 ounce cup.

BIGGBY COFFEE developed its unique marshmallow sauce over a four-month
period of trial and error with the help of Ohio-based Phillips Syrup, a
leading manufacturer of specialty syrups and flavorings. BIGGBY COFFEE is the
first retailer to introduce the marshmallow to the gourmet coffee segment.

"Our goal was to introduce something that is totally innovative, unique,
against the grain and tastes amazing," said Michael McFall, president of
BIGGBY COFFEE. "The result is a new flavor sauce that's fun, delicious and
takes us all back to our childhood when marshmallows held a prominent place in
the food pyramid."

The B Mellow marshmallow sauce is a sweet, opaque syrup that looks and
tastes just like a melted marshmallow, only it pours like a chocolate or
caramel sauce typically would. The result is a unique and tasty solution to
the sticky mess of real melted marshmallows, and a boon for the coffee
retailer and marshmallow-loving consumers around the country.

BIGGBY will introduce five marshmallow-based drinks this month in addition
to the Caramel Mellow latte; among them the Mellow Hot Chocolate and the
Mellow Steamer.

can you put my marshmallow on a stick with some chocolate - I like mine warm and mushy all the way through but not burnt on the outside!

I LOVE THIS! HOW GREAT - I am thinking about a fall bon fire right now!

I'm loving the Mellow sauce--I can't wait to see what sort of interesting recipes (Latte of the Day and the like) spring up from it...one interesting one that I haven't tried yet is a caramel mellow cider...sounds interesting!

Marshmellow? Ich! I never liked it as a kid and I don't like it now. So I'm just going to stick to the caramel. OK?

I was having the same thought as JD. I got a Hot Caramel Cider this morning and later thought how cool it would have been to add the Mellow. There is always tomorrow =9

Yummy! These are probably the most amazingly different drinks! Definitely a home run (if you like marshmallow... and few don't). Staying on the edge! Love it!