So I pull into the Main Street store (we call it #151) it's just off the corner of N. Drake next to a ColdStone Creamery, a great spot. Of course you all know I try to go into these locations under cover....but my cover was blown in about 3 seconds. Fathy Shetiah, a co-owner of the store was sitting at a front table with this store manager Tina and also Morgan his store manager from their location on the Western Campus. I gotta give him credit though....he said hello and we made eye contact, but the baristas behind the line had no idea. Those guys behind the counter did an awesome job.....you would a thought they were serving the CEO of the company (the kinda service they were giving me)...as far as they knew I was just some Joe off the street....but it was beautiful, just beautiful. I ordered a double short latte, just the kind of pick up I needed. They were all over it and I felt great about my whole counter experience. 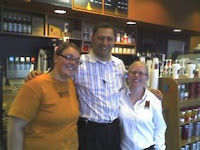 The A-Team.....Morgan, Fathy, and Tina
Ya'know? Everytime I go into a store, I try to find a thing or two that's not right....but these guys were really on top of it! Of course they had the A-Team on....two managers, an owner, and two Baristas (Emily and Lauren). Fathy is spending a little more time at this location because he wants to increase the energy in the store.....course I told him 'turn up the music!', ya can't help being energized if the music rockin'. I had a hard time concentrating, because people just kept comin' in, (I had a seat right by the door) this is a good afternoon spot, a lot like Mike Densmore's store up there in Mt. Pleasant. When your near a college like this ya have to remeber students stay up late, and they get up late....so some times you won't see them till' after the sun comes up (wink). I took this shot as a whole group came in, in a flurry.... 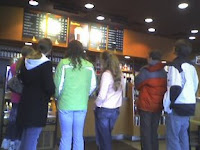 Looks like these guys were getting ready to take an exam on the menu....and they were going to memorize it quick. But the more I watched them...I realized they were just new customers....both Emily and Lauren handled them like champs....it's one of the things we do well at BIGGBY COFFEE....make the process easy. I mean there are all these funny names for drinks, and special terminology....and some cafes make you feel like a real dork if you don't know what your supposed to know....ya'know? Well it may have been their first time, but I can tell these guys are coming back! I have to hit the road again....but I am sure I'll be back to K-Zoo again....soon!
Posted by BIGGBY BOB at 3:10 PM

Wonderful location, worker's and great service also! Thank you for covering Kalamazoo so well, no matter where we go, what we are doing, we can always enjoy a Grande and a wonderful Smile! Thank you for such wonderful service and the BEST coffee ever found. Hope to see you in Plainwell/Otsego soon also! How ever the drive is not long, when you have a dreamy, wonderful cup to go!

yeah, yeah...Plainwell, 'bout halfway between K-Zoo and GR...I'll have to forward this one on to some of the crew at the home office. Thanks!

Portage #153 on S. Westnedge...the best of the best! My wife and I drive out of our way every morning just for the great drinks, conversation and the best staff around! "Mocha Berry" is my drink: Trente Mocha Big Chill, extra shot, blsckberry and no whip." It's the best way to start the day!

Great job Morgan and Tina! I love seeing PERColators singled out on the blog for praise, and these two are veterans...Morgan and Tina have both been with BIGGBY for years now and have worked at multiple locations. Congrats to both on the job well done! -Jeremy