I slide into Jackson about 11:30...127 South sorta dead ends there...I went past the shopping center and hung a right on Monroe....1 more block, took a left and there they were. I was excited about gettin' there (it's been a while), I strolled in and the feel was good... a couple of people were sitting in front of the fireplace....I was kinda jealous....I was still cold from my stop in Holt, and coulda used some of that raw flame, ya'know?


When I walked in though, there was nobody at the cash register (that's a little bit of a 'cardinal sin' in our system)...but then before you knew it Denise blew out of the back....she was so apologetic, that I started feelin' bad, for thinking that it wasn't good, that nobody was up front.

Well we got over that moment, and everything was perfect from there on out. I found a corner that had a plug, with a good sight line of the door and the counter....'course they have (free) WiFi...like most of our stores do....it's a requirement for a road warrior :)

No sooner did I boot up, than in walks Matt...he was on the phone, but when he saw me, his jaw about dropped and he told the person he was talking to that "one of the founders of BIGGBY was sitting in the dining room, and he had to go" ....Unnecessary, I hope it wasn't the Governor.

Anyway we had a good time chatting for a while, and then in comes Brandon....he joined us, and we all talked a little business. The whole time people were coming and going....it seemed like they knew everybody. There was a short lull, and I managed to get a shot of Matt, Denise, and Aaron (he has been on staff for about two years....Denise is Matt's wife) 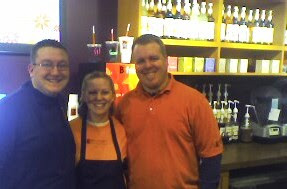 I was just about ready to 'pull flaps' when a couple of guys strolled up to the table....asking if I was one of the founders....they were big guys, so I hesitated for a moment, and said yes....They broke out into big smiles and earthy handshakes.....and then took the time to tell me how much they liked this store...they come in a couple of times a day. Rick and Harvey are like a lot of our customers....they come for interaction with people who care. When you think about it, there are a lot a places to get a cup of coffee in this world...but it's hard to find a place where somebody knows your name and cares about how your day is goin'. One of these guys lives in DeWitt and goes to Deb's store all of the time....the other lives in Stockbridge and said there are two coffee shops there...but that they just don't get it. 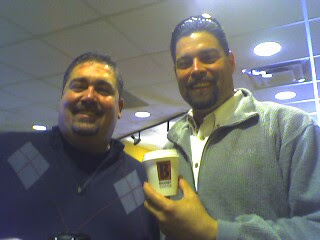 Rick Snellenberger and Harvey Morrell (Primo BIGGBY customers!)They love our shops....they love the 'Caramel Marvel' and one of them (I won't say which) loves the 'Teddy Bear'.....but can't bring himself to say "I'll have a Teddy Bear" out loud....he suggested we come out with a drink called the 'Grizzly Bear' instead....I'll forward this one to the office....they gotta know real men don't drink 'Teddy Bears.' It was great to meet these guys, they sat down with me and we talked about everything from German restaurants to Dart Container company....it was a good time. They had to get going, but they let me take a picture before they went, we had a good time...and I appreciated the fact that they took a moment out of their day to tell me how much they love this concept and the people that they meet in it....they didn't know it but I was thinking the same thing about them, ditto guys, and thanks!

Oh good, I'm not the only one who is *slightly* embarrassed to say I like the Teddy Bear...it sounds so much more dignified to say that my favorite is the Mocha Caramel ;-)

This is really cool that you are doing this. Tells a lot about your company and how much you care. I wish all top management cared this much and was this passionate!!

I also think it's great that you take the time to visit different locations. Will be looking forward to hopefully meeting you in Kenosha, WI.
I've been going there since they opened and really enjoy the coffee and especially the friendly staff.
The service is like no other. I always feel welcome and it's nice to interact with other customers.
Hope to read when you'll be in the area.

that's funny! we call the teddy bear a grizzly bear for a few of our "manly" customers. for that they call me their "butter bear".

glad to hear the jackson store is doing well, it's my hometown! i love the fireplace there too. so nice this time of year.

Hey Bob! I love that you're out visiting my favorite place on earth. I hated coffee before your stores started popping up around town. I really hope to run in to you at one of the many stores I frequent in Metro Detroit! It would be such an honor to meet you! Biggby rocks!!!!!

Hey "BIGGBY Rocks!" ....if there is not another snow storm, it's likely I will be in the Metro Detroit area next week. If you see me and mention that you've seen my blog, I'll buy!

Greetings from above the 45th parallel (barely)
Just today I discovered this blog, before beginning my 2:00pm shift.
I had some time to read through the blog and this one caught my attention. Amazingly just
this afternoon I had a customer (male) from Monroe. He stood in front of me at the cash register and ordered his DT Teddy Bear. Then mentioned to me laughingly, that he was uncomfortable ordering a Teddy Bear.
Naturally this led to our discussion regarding this particular blog!!!! I discussed with him the possiblility of a "grizzly bear"
Yeah team BIGGBY!
I love my job, our owners Nick and Chanin Spadafore (originally from East Lansing---Go Green) are awesome people!! (they ROCK)
Go Team BIGGBY!
And yes, I am writing on duty, but I've got my teammates out in front covering for me!
Affectionately,
Lady Di

Hey BOB - safe travels today! Many BIGGBY COFFEE customers may not know this, but when you use our website and send us your comments, we actually ANSWER them. The point being we get a ton of positive comments about our Jackson location, the customers there love them! Well done in Jackson!