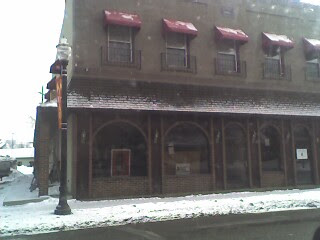 Well yesterday I was a little wrapped up with Discovery Day (I'll tell you about that some other time) and didn't officially get out to a BIGGBY Store. This morning I woke up with an inspiration.....it was time to go to Jackson and visit my friends Brandon and Ansel, they opened March 14th 2005...that's one day before our first locations anniversary day, March 15th....they set the record at that time as the best opening day ever....cool huh?

I wasn't but a mile on the road and I remembered that Will (he ownes a BIGGBY COFFEE on South Cedar) was starting to swing hammers at a location he was opening in HOLT....it's right off 127 south, so I thought I would gamble that somebody would be there, so that I could check out the progress. He has a great spot right downtown Holt.....people have been asking me when it's gonna open... not long now:) 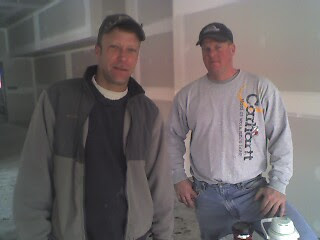 Doug Stewart and Chris Everitt
I drove up and there was Doug Stewart (he has built a couple of locations out)....when I walked in he kinda gave me the "can I help you sir" line....he probably thought I was an inspector or somthing...he recognized me when I turned around though....and gave me a big smile! The location is in what they call the 'white box' stage....it moves pretty quickly from here....Will should be happy with the progress at this point. 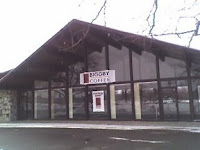 My feet started getting a little cold, there still wasn't heat in the place...'Consumer Power' is slow in gettin' their hook-up on site (can anybody help us on that?)......brrr, I was looking forward to getting back in the car....I considered getting back on 127 south, but instead I decided to head down Hwy 36, takes you right into Mason (5 miles down the road), Lori (another franchisee) is working on a site there at the Mason State Bank....it's got great visibility and great windows...I can't wait to sip my first cup there.....Lori and her clan have been wanting to put a coffee shop in Mason for some time, they have been patient...but I would say things are moving in the right direction. Speaking of right direction....I better get on to Jackson....I hope to catch either Brandon or Matt there....check back and I'll tell you all about it. 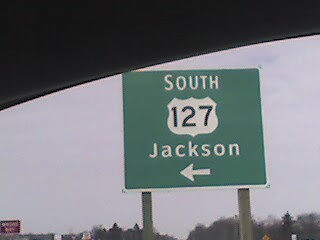 I work for the Girl Scouts. Our office is right around the corner from the future Biggby's location in Holt. We can't wait for the opening!

Thanks! We're all excited...