I wanted to thank Deb (a barista in training)....who inspired me to go visit two stores that are opening on April 1st (no foolin :) ....that's right next Tuesday there will be 89 BIGGBY locations instead of 87.

These two stores are located in the Metro Detroit area...Northville and Farmington Hills, both within my old stompin' grounds. As many of you know I lived much of my childhood in Europe....but in between, I lived in the Metro area.

I love gettin' down this way, and seein' the BIGGBY brand grow here...if ya' can't tell it's personal....ya see, nothing thrills me more than to see our entrepreneurial spirit invade a part of the country that has been dogged by that corporate mindset, you know, where the company is bigger than the people in it.

For us, it's just different...we are a franchise company....What's that mean? That means every one of our stores is individually owned....that's right, a person owns that store, not some big goliath pumpin' money out of the community, no our people are local, they're vested, they're involved....right there on the ground, in the community. It makes a difference in so many ways...that's why when you go into one of our stores somebody actually knows your name, and they remember what you want to drink, and they probably know what you do for a living, and how old your kids are...that's why they ask..."how's your day goin?".....Now, not everybody knows why they like going to our stores....but they do know, somehow, that when they go...they feel better, about their day....about what's going on....

The only way this can happen is if people touch people....not physically, but touching their lives....and it has to be real. And the only way it can be real....is, if it is. And so I come full circle, and I'll say it again, "a person owns each one of the stores"....and that makes all the difference :)

So let me introduce the newbies.... 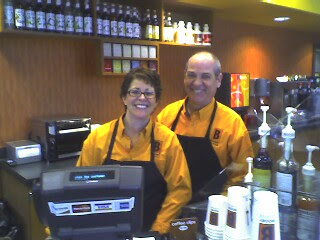 You should visit the Northville location on Thursday too.. because not everyone is working on Tuesday, April 1st!!! :( Oh, & btw Caroline is AWESOME.. && she even asked me if I wrote the comment that Deb did, but I didn't.. haha. Anyway, Caroline is my new favorite person & I wish she was staying longer than 2 weeks because she is so energetic & fun that I want to keep her. She's like my new best friend. :) I wish there was more Caroline's to go around because there should be someone like Caroline in every Biggby store. Also, I feel that the group training for 5 days was extremely helpful. I learned so much!! I am so excited to start working at Biggby (Northville) when it opens on Tuesday! Oh, & the quizzes/tests were really helpful too because it let me know how much I really knew. I love Bruce & Kim, too!! I'm so excited to work here and it's the first time I've really felt like I love where I am working. :) Thanx Biggby!! Oh & the Biggy Best coffee is VERY ADDICTING & I never drink coffee because I don't like the taste of it!!! Jenny (another employee at Northville) told me to try Biggby Best because I was freezing one day and so I did. Now, I am addicted to drinking Biggby Best. :) And Caroline has an addicting personality.. lol. I really wish she could stay longer!!! Oh & Biggby (with BRIGHT orange HAPPY shirts!!) is definetly better then Starbucks (what's so important about bucks with stars, anyway?), Caribou (great, an uncolorful animal serves drinks!!), & everywhere else I've been!! So, Biggby's the best, enough said. But I really think I get to work in the best Biggby store because Bruce & Kim are the coolest people ever!!!!!!!! Biggby = my new love for everyday life. :) And I'm going to miss seeing the people I trained with every day for 5-6 hours. :( If I could be at Biggby 24/7, I would. :) (I'm actually serious!) THANNNNXXXXX BIGGBY!! :)
oh & Bob's blog = the best blog out there :)

p.s. NO, CAROLINE DIDN'T WRITE THIS.

Bobbbbbbb... yes it's Kary, AGAIN. The link in the handbook to buy a Biggby hat doesn't work!! I want to buy a hat b/c my hair falls down & is very thick. Plus, the Biggby hat is cooool!!! What's the link so I can purchase a hat??

Kary, Yowzaa....gettin' a note from you is like drinkin' water out of fire hose! But I love the energy! I passed on a note to the gang at corporate letting them know about the hat deal...until it gets fixed....I think Caroline can help you out.

haha :) I've never heard that one before. Yeah, Bruce said I could order one for $8. Should I let him order one and give him the money or order one from the website (even though I can't find it?) or were you telling me to harass Caroline about finding out how to get a hat??? hehe

p.s. r u drinking water out of a garden hose now?

Hey Bob,
Those girls at the shop near frandor are awesome. They are so friendly and outgoing. Especially helpful as well. I love to go there as much as I can. I believe I still have some money left on my gift card and I got for my birthday from a friend who knows how much I love coffee. But you know I think I will bring some MJ beans home to grind with it. Anyway that shop is my absolute favorite.