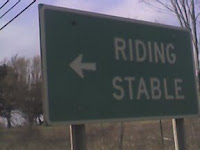 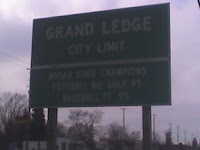 I worked at home as long as I could, but then I just got the itch to go out. I figured that there was no better way to make myself feel good than to drop by one of the stores here in town. I was due to get out to the West side...so I decided to head out to Grand Ledge...about a twenty minute drive from where I live. I cut across town using I 496, then jump briefly on I 96 until I got to the Saginaw Street exit....from there it's straight West on M 43 for a couple of miles. On the way you pass the turn off to the Sundance Riding stables...Nixon Rd http://www.sundanceridingstables.com/ ...a cool place even if your just a beginning rider. I like being outside...being outside on a horse is a whole different kinda experience though...brings out the cowboy, ya'know :)

I'm excited about gettin' to the Grand Ledge store....Andy one of the key people there always sends me great questions about BIGGBY COFFEE for me to answer....I love when people are thinkin', anyway I'm hoping I'll see him and we can get a chance to sit down together for a while. This store is interesting because it was a place called PERK-UP, before it became a BIGGBY COFFEE and went through several owners and never really had the good 'chi' ( http://skepdic.com/chi.html ) that coffee shops have a tendency to have...the location was converted to a BIGGBY COFFEE by a 'Super-Franchisee'....Deb Kirchen....she is a multi-unit operator with six locations up and running....opened her first unit in 2000 and claims (rightfully so) to be the oldest running franchisee we have....now that doesn't mean she's 85 years old, it means that she has been with us the longest :) ....anyway, Grand Ledge has really opened their arms to this location. Grand Ledge is know known for many things...but one of the most interesting to me is 'The ledges' http://www.wsharing.com/WSphotosLedges.htm (check out these photos).....well I know I don't have time to drop by there, but I am just pulling up to the store....and I can already feel the energy...the day is nice, chilly with blue skies...and I have already made a quick adjustment to the time change...but there is something good coming from this location.
I am not disappointed, I walk in and Mandy is doing it all...and she is such a pro. There is a gentleman ahead of me...and she gives him the royal treatment and before I know it he is talking about the trip to Vegas he just took and more...it's one of those things that our barista's do so well....they talk to people (a lost art), you used to find this in local stores....but retail in general has turned into such a 'blob' of service...that I really dig it when I run across somebody of Mandy's caliber. 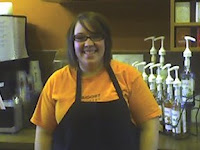 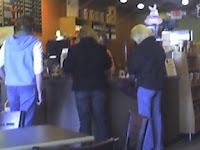 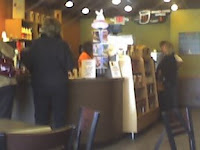 It was my turn, and I already had two pots of my favorite (Mocha Java) at home I needed to change it up and have something to sooth my throat...I knew what that was....Hot Cinnamon Spice...we use Harney and Sons Tea http://www.harney.com/index.html (best tea around!) with a little honey....perfect! Mandy took care of me right away....and everybody else too, I didn't stay long, but long enough to watch her work with one customer after another....all women (seven in a row)...hmmm, wonder why? After things settled down a bit, I went up to let Mandy know she did a great job, and she did...I had a chance to chat for a minute, and she said she also works at Pier One...another neat place. I asked her if she was from the area, and wondered if she remembered the coffee shop when it was Perk Up....[what I was lookin' for was whether it is busier now that it is a BIGGBY COFFEE]...."definitely" she said..."how come?" I asked....without blinking an eye she said"the reputation of BIGGBY COFFEE"....'course I had already tipped her, so there was no reason to 'flatter me up'....but I am a sucker for it, and it was music to my ears. I actually think it's the job that people like Deb, Andy (I never did see him), and Mandy do...Mandy said she had only been with the company since January or so....it sure seemed like she was an old pro to me...Oh, and I asked her about all those women, and she said that seems to happen a lot in the afternoon....around school letting out and so. Thanks Mandy....it was awesome...and next time wake up Andy in the back will ya':)
Posted by BIGGBY BOB at 6:44 PM

I was enojoying a long afternoon/night of tutoring someone in economics and attending an organizational development class. I hope to catch you next time and I am glad you enjoyed your visit.

Andy...I hope you know I was just kidding (about sleeping in the back)...until next time.

I know...see you next time. I hope you are enjoying your Biggby tour. :)

Very interesting... I'd like to share these kinds of experiences and knowledges with my riding stables: stay tuned? ;)