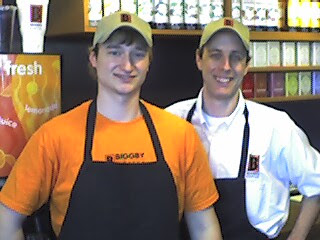 I was just packing up from my visit to Steve's store....thinkin' that I had gotten by without being noticed and bang!...Tony walks up to me and says 'how's it goin' Bob?" So much for being there on the QT...so I pop out to the car to get my camera...well worth it, both Tony and Andrew have those winnin' smiles that make our shops so nice to go to, ya'know?

We were chattin' for a bit, and one of them asks me if I'm headin' downtown GR? "For what?" I say....well apparently Steve just took over the Downtown BIGGBY store. I break out into a smile because that shop has been under a little duress, we had the wrong kind of operator in there...and it wasn't doin' much for the Brand. I made a mental note to send the guys back at the corporate office an email to say 'thanks for lettin' me know!' I should give them a little bit of a break though...they been workin' hard....and their job isn't to baby sit me....it's to take care of the franchisees.
Well this good news puts a skip in my step, and it's all gonna work out because I have to head downtown to see Brian anyway. It's a sunny day and I have to make a few phone calls on the way. I roll into the parking lot at noon sharp. I'm ready to get the job done....we are disco-ing one 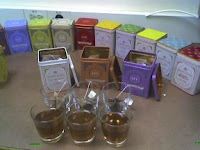 of our teas....and I have to pick a new one. We tried a couple, but I had the Pomegranate Oloong tea on my mind....we cut blackberry, and a couple of cinnamon types (but we already have one of those), I still really like the Pomegranate tea...so it's a done deal, should be showin' up in the store in about 6-10 weeks. Brian and I talk shop for a while, he has been in the coffee industry a while...and has a good understanding....he wanted to take me to lunch, but I'm not into the wine and dine thing....I needed to get back out in the street. He asked me if I was going to stop into Steve's new downtown store (and I thought to myself "I really am the last one to know?"), but I played it off and said "of course."

We shake hands and I blow out the door, the sun is shinin' and I am only a couple blocks away from Steve's store....but decided I was hungry. There are plenty of places to eat in GR, but I decide to go to the Sundance Grill http://www.tripadvisor.com/Restaurant_Review-g42256-d597245-Reviews-Sundance_Grill-Grand_Rapids_Michigan.html , (a friend, a fellow HB graduate, and a fellow MRA board member...Jeff Lobdell, owns the joint) and it's only 1 block from the BIGGBY COFFEE store. Jeff is one of those brilliant creative types....that has a great business sense (not only does he own Sundance....but he has got places in GR and TC, like the Omlete shop, Beltline Bar and Grill, and the Bagel Beanery....tell me that's not a lot! Occasionally he gives me reports on what's going on in our places, but to be frank, he has a lot on his plate already. 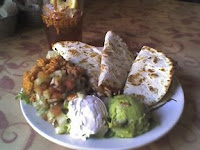 Well I'm a starvin marvin by now...but I know the food and service would be primo....and man was it! I had the Pueblo Chicken Taco plate.....yummmy! Thanks Jeff! I'm plenty full when I leave and I just need to walk down the block....I could of used a few more ;)

I'm hoping I'll run onto Steve when I get there....but he moves around so much with all these stores that I am never really sure. I walk into the downtown store, it's right across from the Amway Grand Hotel....a highly visible spot (I love it!), and I see a face I recognize already (Justin)...he breaks out in a smile and says hello across a couple of customers....I was tryin' to be a little more low key, ya'know? Anyway he and Noah were really workin' the crowd and I can see the change already...Everything looks like it's good and stocked, and the store is spotless....You can already feel Steve's influence.....I ask to see if he was still there...but busy guy that he is, he had already moved on. 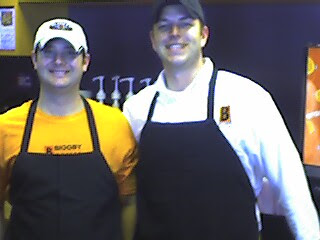 Lot's of professional types coming in this store, I asked Justin if anybody was talkin' much about the ownership change, and he said everybody was ready for it, and they were very excited!

Well I had an appointment back at the office that I had to get to....so I blew out and asked those guys to let Steve know that I stopped by....the day was still sunny....and a lotta good things happened today...what more can you ask for!

Barista Lady Di here...
from north of the 45th parallel...

I love the Beltline Bar, I haven't tried some of those other places but will add them to my list.
I am glad to hear about the location across from the Amway Grand, we drove through Grand Rapids today and counted the big tall construction cranes in downtown GR which can only mean growth. Exciting.
I truly enjoy working at BIGGBY and appreciate our owners Nick and Chanin.
Go team BIGGBY
lots of BIGGBY love
Lady Di

I have tried a pomegranate tea and love it.
What a nice addition.
Thanks,
Much BIGGBY love
Lady Di

I have to echo Lady Di...I grew up on the Beltline Bar, been going there since a was 5 or so, and had maintained for years that it was the best Tex Mex in the area.

Aside from that, it's really exciting to see this store given a second chance...when I was there to train the initial staff we were SWAMPED during the days where we were practicing on the line ("relays"), which is a testament to the opportunity in downtown G.R. for the BIGGBY brand.

Justin is a great ambassador for the brand as well...it will be very interesting to see what Justin, Steve, and the rest of their team will be able to do for their store. Good luck guys! -JD

I simply wish to offer you a big thumbs up for your info, really I adore the places and restaurants there , I so enjoyed this preview with you.
5 star resort in darjeeling
Best hotels in gariahat for couples