I had to get a jump on the day today 'cuz' I have an appointment back at the corporate office at 3pm....I don't like having meetings there, but sometimes it's necessary....I also had an appointment in GR with a guy that wanted to introduce us to his breakfast sandwiches...I rolled into the Beltline store, off 28th street just in time...he was ready and waiting. We talked for a while and I had a great double short Sugar Bear for the meeting. It hit the spot, with the right amount of caffeine, sugar, and I love the whip cream......I needed the pick up after watchin' the primaries last night in Ohio, Texas, Vermont, and Rhode Island....I'm hooked on that stuff right now. Before I blew out of Beltline....I remembered that I needed a pound of MJ.....I brewed the last of it at home this morning....and our house doesn't move first thing in the morning unless there's a cup of coffee involved. They ground it autodrip for me, just the way I like it, and now I'm good to at least Friday.

I drove right up Beltline thinking I had a couple of options of where I might stop next, but in the end I decided to head to Jason Nash's store, I had spoken to him a couple of weeks ago and promised I would stop by soon. On the way I thought I would stop at the local Sign-a-Rama http://www.signarama-usa.com/web/about_us.htm , they are the ones that helped us with the sign change in GR and K-Zoo and see if Brian was in.....(hey Brian, do you think we could get a picture of us on your site?)...I had some final details to work out with him...the cool thing is he is a franchisee too (with sign-a-rama)....he has always nothing but good to say about our system....he digs the operators....he thinks we are a very fair franchisor...and wishes his was that fair, simply he just loves us! Thanks Brian....we appreciate all the great comments!

Brian wanted to show me around a little and we talked shop....but really I had Jason on my mind. I said my goodbyes and hung a left out of the drive, I only had about a mile to go...the location is just past Lowes on the right. I arrived about noon, which can be a funny time in our shops....because most people are out to lunch....so sometimes business can be a little soft around then....when I pulled up though, it was hard for me to find a space, I walked in and there were all kinds of people everywhere....business people, moms with kids, meetings, readers, and of course all the people coming and going. I'll just say it....I had a 'five star' experience, when I walked in Stephanie was on cash....bingo, I got that exuberant 'hello' I'm always lookin' for'....I'll tell ya, nothing makes your day better than being greeted like that! I ordered a double short latte (I already had enough sugar earlier).....and she made me feel right at home.....then, what I thought was a customer came in behind me.....and boomed out 'hey Bob, howz' it going', I turned around and there he was 'Jason'......I love running into him, ya' can't help but smile when you see him....he has that kinda energy. Well as often happens now, my cover was blown, so there was none of this clandestine sit in a corner thing. Anyway, I slid to the end of the counter to pick up my drink and Deanne (Dee) made me the most beuatiful latte....it was yummy!

Jason was excited to show me around a little, and wow does he have a great 'Back of the House' ....I mean it was clean and tidy to a fault....but if you saw Jason thats the way he carries himself and so it's no suprise. We talked for a while and I asked him if I could take a picture of him and the staff....he said sure....I tried to cue up Stephanie and Dee, but they kept gettin' orders through the drive thru and people kept coming in.....I stood around a while, but decided my picture wasn't as important as taking care of the people, ya'know. 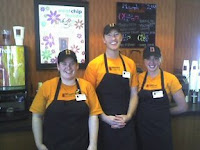 After a while things died down, and I snapped the shot....Stephanie told me about her daughter Meleah...named after her Grandmother....earlier when I was at cash we were talking about the weather and the sunshine....her daughter commented that the birds were singing to her this morning.....I do have hopes of Spring, eventually, thanks Meleah.....you and the birds give me hope. Stephanie and Dee have been at Jasons store since they opened, but Dee told me that she used to work for Judith, over in Kzoo (Gull Lake Road), but Dee is engaged now and her husband to be, works at a local Meijers.....sorry Judith, Dee would be a loss for you and a gain for Jason.....but what do you do, when love calls?

Hey Bob!
just wanted to say, this is the first time i've read your blog, but i really enjoyed it!!!
it kinda made my mouth water and now i want to go to Biggby's!! (probably on Westmain in Kazoo)...
have a good one!
-Dan

Way to go Jason and team! Nice job! Keep up the great work!