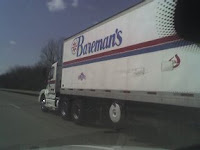 I love saying the word Kalamazoo, you have to smile when you say a word like that, right? I've school on my brain because I am speaking tonight at 7 pm tonight at Albion College, Norris 102. So this morning as I'm watchin' the results come in from the most recent poll (peanut butter cup is still winning)...and thinking where I would like to go...and I decide to head to the BRONCO MALL on the campus of Western Michigan University.

I shot down I -69 to I-94 West towards Chicago. On the way I passed a couple of these trucks....BAREMAN'S Dairy, quality outfit from Holland, MI....apparently we are keeping over 100 cows employed 24/7. They have the best tasting milk in the State, hands down.

I hung a left up 131 towards GR and hopped off at the next exit....WMU bound, I figured I would just follow the signs....not so easy, WMU campus is like the streets of Paris....without GPS, it was nearly impossible....you'd need a degree just to get off campus. Well, after a few U-turns I finally found what I was lookin' for, and pulled into visitor parking. I was feeling a little relieved but not for long visitor parking was .25 cents for every 10 minutes, yowzaa!

not sure where else to go, but if you look at the lot, you can figure the same that I did...what they meant to say was 'Don't Park Here' unless your desperate. Got it!

It's a short walk (and I paid the price)...I get to the store and man was it busy.....people all over the place....protocol went a little out the door, but understandably so! These guys barely had time to breath....much less go through the motions.....it was one 'Big Chill and Mint Chip Freeze' after another. The blenders were screamin' for mercy. People were hanging out on their computers, reading books, talkin' ....the whole nine yards. Nice to see. Kelsey and Nate were answering question left and right...."what's a red eye', 'what's the e-wards about'.....big excitement!

I got my usual double short latte on my way in, but on my way out I changed it up with a Tall Nutty Buddy, ICED, Yum. 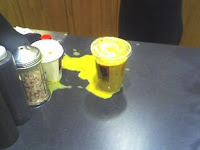 Kelsey was a little embarrassed, especially when I asked if I could take a picture....and she said "You're not Bob Fish are you?" and then when I nodded yes....she put here hands up to her face...sorry Kelsey, but it was such a great moment. The cup cracked, cuz' somebody opened the case using a knife and basically scored all the cups (a lesson out there for those of you in the know).

These guys were workin' hard....but the spirits were high (it's the BIGGBY WAY!) 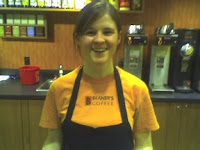 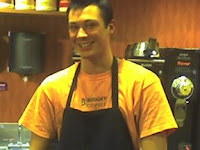 Nate...for those interested, he told me he was a model...he even had to approve my photo of him...(I have a witness)

And guess what I met Ellen too... 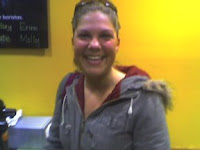 Ellen is on the staff too, but wasn't workin at the moment.....are ya' crazy? Your supposed to go home when your not workin'....some people just can't get enough!

I'm writing this in Marshall, MI BIGGBY COFFEE because ya' had to be a student to get on the wifi at WMU....I'm twenty minutes down the road from Albion....so I'm gonna have to wrap it up pretty soon....it's 6:15. My degree is from MSU.....but I'd go back to WMU any day......can somebody send me a map....and circle where yer' supposed to park, thanks!

Hey Bob.
I think it is really cool that you do this. I just hired in at the new location in Nothville with Bruce and Kim. I have been in training all week getting ready to open April 1st. You should come by and see us. I'm really excited to be working at a Biggby Coffee and with great people like Bruce and Kim. Oh and our trainer Caroline is AWESOME!!!!!!!!!

Caroline is on my team here at BIGGBY COFFEE - I will make a note of your comment for her next performance review! You are right - she ROCKS! Welcome to the BIGGBY team although given the name maybe Caroline wrote this!

It's good to see pics of my Biggby buddies, Kelsey and Ellen. I wish I could also see Suzy's pic too.

Kelsey, Ellen, and Suzy are my buddies and they're my main reasons to frequently visit Biggby. Without the three of you I might rarely visit Biggby. You know I could get my orange juice from somewhere else too (:). But I can't get awesome friends like you just anywhere!

It;s great to see and read about your travels throughout the stores.

Are you planning on making a stop at Big Rapids to check how the store is coming along? I am patiently waiting for it to open.
Best of Luck in your travels.