Short trip today....I have some business back at the office around 4pm...so I couldn't stray far. But watch out Metro Detroit I am comin' yer way....this week. Remember if anybody catches me in a store and knows I'm blogin', I'll buy!
This weekend I had hopes that Spring was on it's way, and I actually got out and did a little yard work....nothing magnificent, just enough so that I could hold onto to that idea that Spring and Summer were comin'. Of course my mind started wandering, as it does, I was out there picking up sticks...and I started to think about melons! Yep, melons.....
Now, I was also trying to make a final decision on which location to drop by on Monday too, so I decided to combine the two.....melons and locations, and Bingo! It came to me Howell, MI.
Ahh, your wondering how does that work?....Well Howell produces the the most lush cantaloupe I know...it is sooo good...and it is celebrated every August at the Howell Melon Festival http://en.wikipedia.org/wiki/Howell_Melon_Festival ...if you never had one, ya' should.
I am quite excited about gettin' to the store because their numbers have been amazing....Up over 60% over this same time last year. I don't care what business you're in, those kinds of numbers are impressive, especially when you consider the economic climate MI is in right now.
Terri (manager extraordinaire) has been runnin' the shop and Phil is the BIGGBY Franchisee....I wanted to get in there, and pick their brains a little....find out what this growth they are havin', is all about....did they have any secrets? So anyway, I had my pot of MJ at home this morning and rolled out early....I had a reporter that wanted to interview me....so I scheduled it for the drive down...it took about a half an hour to get there....just enough time to not get in trouble with anything I said to the reporter. It worked, before I knew it I was at the front door, and I didn't say anything 'too' crazy in the interview:)
I bounced out of the car...and rolled inside...Terri was doing some interviewing (I guess you gotta hire, when you're growin' like that)....they were a little light on the cash point, because the drive through was jumpin'....but Dave saved the day! He didn't recognize me (which is the way I like it)...but boy did he do a good job. Now the thing about this is, he is a brand new employee....that's right....just came out of training....wow that's impressive! I can usually spot a newbie a mile away....I mean ya' go to most places in this retail world and OJT, means the customer trains you....not here! As you can guess, I found the first (#1) secret to success at the Howell hotspot....They invest in their people! There is a lot of chatter in the business world about training your people and giving them the tools to do their job....but most places, that's just 'jargon'....when you find someone earnestly doing the right thing....you can really feel the results...Nice job Terri! 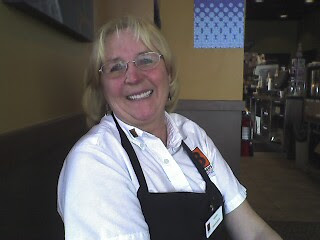 Well I settled down somewhere between the door and the cash, but by a window (so I could keep my eye on the drive-thru)....and I saw Terri wrapping up her interview, and as you might guess she came over and sat down with me for a bit.....You want to know the first thing she asked me? "How did we do?.....What can we do better?...Anyplace to improve?" Now this is a woman after my own heart....and I just found the second secret (#2) to success in Howell....it's not what they already know that is important.....it's what they don't know that ends up being important....and that's what she was after! Said differently, the pathway to perfection has no finish line....the line keeps moving, and you have to keep moving with it!
Now I know for a fact that a couple of coffee shops haven't been able to compete with this BIGGBY COFFEE...these (other cafes) had to close their doors...never a good day for any business....but I am beginning to understand why. One of these closings, was one of those big guys that seem to think their brand has got the magic.....they don't understand that it comes down to people like Terri....I'll say it again....People Make a Difference!!!! I hope that wasn't too loud....Whew! 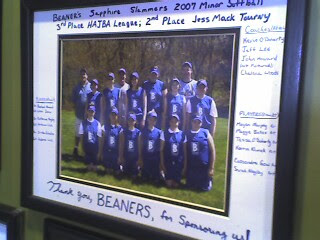 So Terri is tellin' me a few more things and I found out she is ultra plugged into the community....(you know that ROI -- Return on Involvement-- I'm always talking about.) She takes me to a wall full of it! There are softball teams, Balloon Festivals http://michiganchallenge.com/ , team awards, Chamber stuff, letters of thanks....and on and on....it was real personal.....and what is the reward for this??? As I always say...giving comes back ten-fold.....they were voted "Best Coffee House in Livingston County!" Reason #3 for the success of the Howell store.... 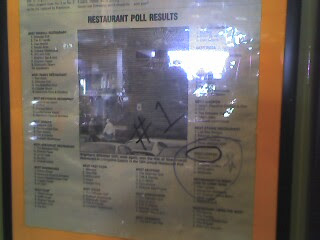 I finally managed to get a photo of the whole crew.....it was hard, they (Janelle and Sally) were keepin' the folks movin' through that drive-thru.....Now there are times when you can hear the drive-thru speaker, even in the dining room....and that's OK, but I wanted to let you know that over the babble...while Janelle and Sally were working, I actually heard the words "I Love You Guys!" come over the drive-thru.....Now how many times in a day do you hear that in retail? I bet almost never....but ever since I have been on the road to all these BIGGBY franchises....I have heard it over and over again.....the last time I heard it 'shouted out' like this though, was in Ann Arbor.... 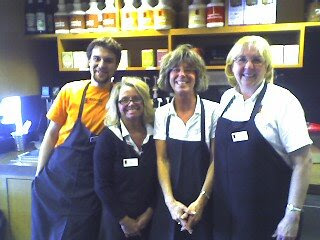 Dave, Sally, Janelle, and Terri
Now when Terri and I were talkin' there was one more thing (reason #4)....I was asking her about the customers that were abandoned by these other coffee shops....and one thing she said stuck with me. She said "Some of these customers didn't even know the difference between a cap and a latte"...Now at first blush, you might think that's a 'snooty' statement, but you would have to know Terri and the gang to realize that they were just aghast that those other cafes never took the time to help their customers understand. They get an A+ on this one.....you have to recognize your customers as individuals, and you have to invest in them.....if you don't...they won't invest in you.
I've now been here a coupla' hours now and I am sure they are ready for me to go....I have had two double short lattes, cuz' the first one was just that good.....I know I am biased, but I love our coffee....
This team has never stopped since I arrived, but I am glad I came today....I learned a lot, Thanks Guys!
Posted by BIGGBY BOB at 11:24 AM

Everytime I am in the Howell store PERC is great! Nice job to the Howell team!