I'm up early this morning and still a little under the weather....but I've been thinking about it since last night.....Grosse Pointe....so many people have told me how beautiful this store is, but I haven't had the chance to visit. I Google map it to find out how to get there and the directions take me down I 96, then I 696, and so on...but I decide to slip in the back way by shooting over to Flint and head south on I 75....it's not shorter, but there is a little less traffic. It's a fairly long drive, but I've had my pot of MJ this morning....so no worries. The drive was beautiful...and everything clicked along nicely.....I spent the time thinking about ROI and PE ratio's...sounds a little dry...but you never know where those kinds of acronyms can take you....especially with this company.....before I knew it I was there.


As usual my goal is to drift into the store as undetectable as possible, and ride under the wire for a while.....to get a feel for things.....but I walked in the door and found about half the corporate office there....Tom (VP-Ops) and all his cronies Tony D., Caroline, and Stephanie....they are making the rounds, and touching base with all kinds a stores today. Talk about overkill though....I was going to call back to the office to see if anybody was still working there.....but then I thought about it some more, and decided that it's not such a bad thing to have these guys out in the field working with the operators.....if I was a franchisee that's the way I would want it, ya'know? 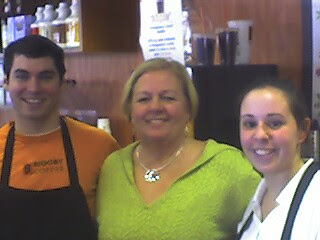 So anyway....I'm walking in and I want to get up to order my cup....it's been about an hour and fifteen and I usually can't go that long....those corporate guys probably thought I was a little rude, cuz' I blew right by them....and Joe said good morning to me right away.....it's the 'BIGGBY way', he handled the whole thing perfectly.....frequency card and all, I ordered a double short latte (you can tell I am feelin' better), he must've been doing this a while.....he sent me down to Jenny right away...I read the trivia question....got it right (I'm good), and then boom there was my drink! It's exactly the way it's suppose to happen.....I couldn't wait, the crema and milk foam looked so good, that I had to have a sip right away.....Thanks Jenny....it was sooooo good!

Now you would've thought with all these corporate types runnin' around, Joe and Jenny might have been a little nervous....but they didn't miss a beat....not one. Sue (the owner), told me that Jenny is the shift leader and has been here since day one, and Joe is relatively new....but they were workin' together like a well practiced team.

I found a spot n' started to boot up the computer....and while I was waitin', I went around to snap some photos. Sue and Tom were talkin' out front...I caught them here in front of the fireplace and TV....I didn't want to keep them long, it seemed like they were covering some important business. 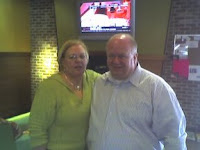 Next I had to get a picture for you of our team out there in the field....Tony D., Caroline, and Stephanie....I mean, I wasn't sure all the stars would come together like this again....Sue has a very unique space in her store for kids, so I decided to take a shot of those guys there...somehow it seemed appropriate to put them in those undersized chairs.... :) Now you can see that the women are havin' fun...but Tony D. is a little suspicious....I think he knew, he would end up right here.....but I gotta give it to him, forever the marketeer......nice way to hold the logo for a photo shoot Tony! Thanks guys! 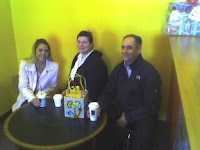 A lot has happened since I've been here, Sue is very proud of her store and the place that it holds in this community....all kinds come here, including the local police and a couple of guys from the Post Office (I think I am sittin' in their table (oops))....you know when you get these kind of people in your store....you are plugged into the community! She showed me some things going on with her store and took me to their 'community message board'.....the first one is a 'thank you' from a kindergarten class (the store saved milk jugs for them....to make gift baskets with, the second one is from Ed Gaffney http://house.michigan.gov/rep.asp?DIST=001 , he has meetings at this store on a regular basis....hey Rep. Gaffney.....that's a great way to spend time with your people, I love it! He probably goes to our store there in Lansing too, on Ottawa St. (they call it the Rep BIGGBY's (there is a Senate one too)a story for another day) 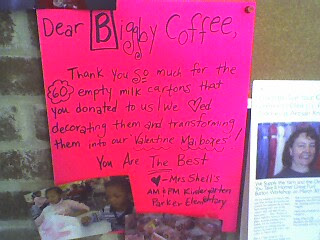 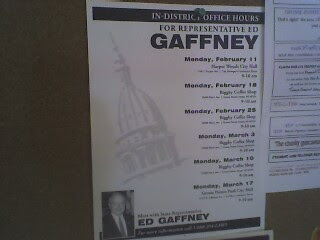 In some ways I already knew about all the cool things that go on here.....(spies everywhere:) )....I have some folks that I know, that live in the area and they always have good things to say about this store. One of my MRA buddies Janet Belcoure (owner of Detroit's oldest restaurant...Roma Cafe http://www.romacafe.com/ ) stops in every once in a while and gives me the lowdown....the nice thing is that Sue goes to Janet's place too....and has nothin' but good to say about the place.

Sue had a chance to sit down with me and we chatted about all kinds of things....but the thing that comes through the most is she loves this community....and she loves her staff....she calls them 'her kids'....the love is strong, and you can feel it throughout the store. We talked a little about all the different kind of people that can come through the store.....and some of the funny stories that go along with them....I told her my 'tutu guy story'...she told me some of hers....as we were talkin we watched a love affair unfold in front of us, by the fireplace....apparently it's been going on for months.....who needs a TV in the store....with "as the World Turns" live :) Well the cool thing is that every BIGGBY COFFEE is a microcosm of the community....coffee shops today are the back yard of your 'community of yesterday'....and this one certainly is....they are practicing good ROI (Return on Involvement) here, and it shows! Thanks Sue and everybod Team, we are very proud of you.

I love your blog. I love Biggby's coffee. I lived two blocks from the original store in East Lansing, then moved back to GP where you just opened a store and have finally settled in Northwest Ohio where you have multiple stores. Thank you for having Biggby's be a place I always want to go to.

Oh come on now, Bob...how can you throw out a teaser like "the tutu guy" and not give the payoff of the full story? Any chance of a full retelling? -JD

stephanie....thanks, I have a lot of fun doing it....and I love hearing from BIGGBY loyalist.

JD, yeah..."the tutu guy" if you were a loyal BIGGBY customer at the orignal store in '95 & '96 you probably would have seen him. For the rest of you...it'll have to wait for another time:)

it's nice to hear such wonderful things about sue's store! she trained at my store last year, and she was AMAZING! i still have to get out that way to visit her :)