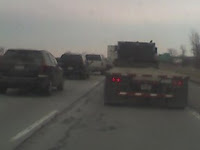 I woke up bright and early this morning...knowing that I was headin' to the metro Detroit area...I had my pot of coffee, but with a twist...as you know I am a big Mocha Java fan, but this morning it was Costa Rica...we just rolled it out to all the stores, and it is one of the best straight origins I've had in a long time....clean, bright, but solid....it was gooood!

Anyway I had Mohamed (Mo) on my mind....he is the franchisee in Westland...I hadn't swung by his store yet, but I really wanted to, he has one of those very dynamic personalities....that just doesn't quit....and since there was still a little snow on the ground, and Spring was still feelin' a little distant, I needed that kinda 'pick-me-up.'
It's a straight shot down I-96, till you get to I-275....about 80 miles, an hour and fifteen minutes for me, since I've had to pull the reigns in on going above the speed limit. I had Janis Joplin in the deck and it was some good listening.....traffic was heavy, but I just took that as a good sign.....it's when traffic's not heavy that you gotta worry. 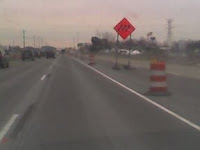 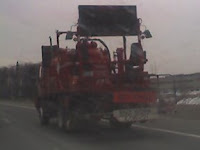 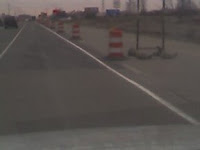 I was just pullin' past Novi when I noticed some roadway construction....another good sign....SPRING is (really) coming! Hotdog! I only had another 20 minutes left on the road.....my exit number was 25, but I didn't have to look too closely....all I had to do was look for the big IKEA sign.... 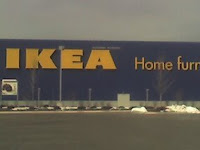 everybody seems to know where that is. If you hang a left off that exit and head down Ford road about two miles you'll find Mo's location on the left.....it's gotta be one of the best locations I've seen....great roadside visibility, plenty of parking!

I had to ditch my logo-coat cuz' I wanted to go in incognito....and it was all workin fine....I came through the door, with my backpack, and a smile....Al greeted me right away....these guys had one of the best counter-side manners I have ever seen. Al did a brilliant job of convincing me to have a scone.....I ate already, but it didn't matter...he convinced me. Just about that moment Mo, came out from back of the house, he hadn't notice me yet.....I was skating by. Al wraps me up and sends me down to the end of the counter to get my double short latte, and Mo hollers out "Is that Bob Fish, I see".....so much for my espionage work :) But I am already smilin'.....I'll say it again, Mo has one of those very electric personalities...a lot of our folks do....but this one is just a little extra....and it feels good.
He hooks me up with my drink and I find a spot by the window and a little behind the cash area, so I can keep an eye on things. 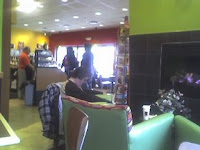 Although I don't know what I'm worried about, because Mo and Al are pros....there wasn't a customer that came in that they didn't know their name and drink....it was awesome! These guys covered a lot of ground....and everybody was talkin' and chattin' and leavin' in a good mood. That's what it's all about!

After a while Mo came over to chat, but he never stayed for long, he had to keep hopping up to take care of this or take care of that....he reminded me a lot of me, in those early days, always on, always invested, really caring about people. We were talkin a little bit about the various things he's is doing to 'imbed' into the community, my favorite was a 'refrigerator art contest'....it involved running a contest with a 4th grade class at Patchin Elementary.... http://wwcsd.net/schools/elementary/patchin/patchin.htm .....and mean while they just kept rolling in. I've been here for about an hour so far....and here is the amazing thing...they still know everybody's name....now, people in our system are good....but this is the best I have ever seen, hands down.

Mo stopped by again, and were talking, and he tells me the Mayor comes in, the Deputy Mayor comes in http://ci.westland.mi.us/ .....he rattles off more (the police, the fire guys) but I can't even keep up.....although I did write down the name Nick, he works for wwj 950....loves a grande chai latte http://www.wwj.com/index.php, thanks Nick.
Well it's hard to keep writing, cuz Mo keeps introducing me to everybody....I met a guy named Dan (primo-customer), been comin' since day one (back in October '07).....thanks for muggin' the mug Dan!.....but you're gonna have to loosin up a little :) Dan, a man who never misses an opportunity brought me his resume...and began to tell me why he should come to work for us...it was goin' well until I told him he would have to commute to East Lansing.....but even then, he was pushin'.....it was great. I get that a lot, people wanting to come work at Corporate, I think they are crazy to want to become a 'desk jockey'....'course that doesn't apply to the gang in Ops....they're always on the road.

Well, I am beginning to wrap up.....but it isn't easy, I just finished a tour of the back of the house.....and, if I don't leave now I might never leave....ya'know?
These guys are awesome! ...I wanted to take a picture, but it's gettin' harder and harder, every time I get up to take one....somebody else comes in....well finally I just had to jam them up a little, ta' get it done....between customers.... :) 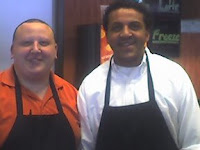 Do you visit the Al and Mo in San Antonio or Westland :)

Way to go guys! The pictures from the art award day were so cool. You make me so proud and gratified to work at BIGGBY.

luv those too..have my carmel marvel ready every day..

I love this store, I take my 8 and 7 year old nephews in all the time. They know what I want and my name , what the boys want and what their names are! They are always having fun and make everyone feel welcome! Keep up the great job!

ahem: hey Bob, it's just a short ride from Westland to Livonia!! :O)

Thanks Al and Mo for all the great service and "smiles"...you make the best "extra-extra-extra" hot carmel marvels.

Bob, The knowing of the names and the care that they put in to their customer service skills does it for me! I'm a large black straight cup of coffee kind of guy and when I walk in they have a cup at the ready, when I don't have my refill mug with me, hehe! Thanks!

Little late to the party on this post but I just wanted to say you were right on with everything you said about the Mo, Al, and the rest of the team over at the Westland location. I only live a few blocks away from that there and when I get coffee that's usually where I go. They always remember my name even if I haven't been in in a while. Also if those guys are having a bad day, you would never know it. They're always friendly and upbeat. I've never gone in there and thought "wow, someone woke up on the wrong side of the bed this morning." I'm finishing up my degree right now and I also have to say it's a great place to hunker down and study. Very comfortable and relaxed.